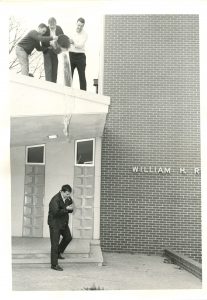 Some groups tried unsuccessfully to become official fraternities, like the Animal Farm, a nearby farm where a group of students lived and partied. Members joked, “if you had a grade point average you couldn’t be in the farm.” While they listened to loud music, drank, and had a bad reputation in town, they saw themselves as “nice guys” while the “other culture” or counterculture was an outside influence coming from Atlanta. 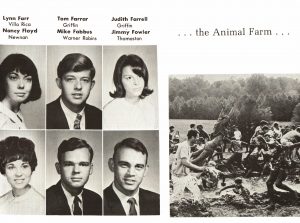 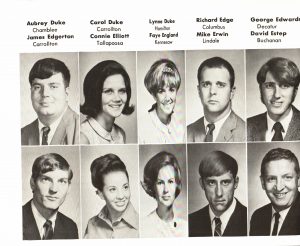 Although not an official fraternity, members of the Animal Farm were featured in the 1969 yearbook. Courtesy UWG Special Collections

Foster’s Store was a cooperative living arrangement on Maple Street near the college, an old store converted into off-campus housing at a rate of around $50 a month per person. Store roommates threw large parties with more than seventy-five guests, all sharing one bathroom that was painted with bright flowers. Residents and guests experimented with drugs, and in contrast to the Farm, saw themselves as political. “In the last years of the decade of the sixties,” remembered resident Walter Carmichael, “the Foster’s Store music scene was the same scene that was going on from California to New York. The music had a hard driving rebellious beat and lyrics that everyone could hear but only us boomers could understand. What seemed like scattered words and chord changes to the WWII generation were the sermons of revolution to us.” 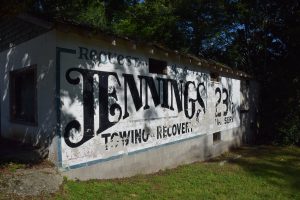 Outside Foster’s Store in 2017. Photo by Kaitlin Costley

At the time West Georgia College was known as a “suitcase college,” meaning most students left campus on weekends, packing a suitcase to go home. Most students also held weekend jobs. This meant parties took place during the week, on Wednesdays and Thursdays before students went home to their families or away to work.

Students felt a disconnect between the school and the community. “We had nothing in common with each other. Even if we wanted to have a big get-together, what would we talk about?” commented one alum.  For their part, locals did not always embrace students from outside the community. On alum remembered, “For the rest of the country, the Sixties is seen as this great awakening and shift to a better world and a better nation, but in the rural South in that time period, it was seen as literally the work of the devil. And it’s still considered a time of ‘how the country lost its way.’”

The Center is located in the Special Collections Suite on the ground floor of Ingram Library. Visitors and researchers must email their requests to cph@westga.edu.

The suite is closed to open visitation until further notice. Please call 678-839-6141 for more information.